Department of Administration and Finance 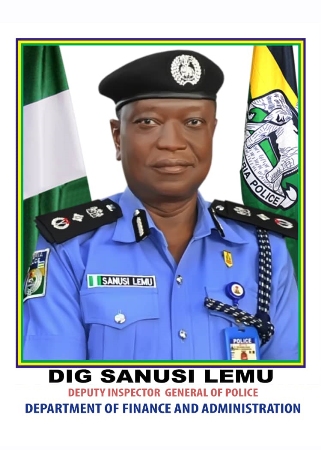 The primary functions of the department are as follows:

The Department of Finance and Administration is headed by DIG SANUSI N. LEMU, mni . The Department has the following sections to actualise its function:

1. Central Administration This section functions as the hub of administrative activities of the NPF. The section liaise with all other Units of Department of Finance and Administration for accomplishment of the overall objectives of the department. 2. Force Provost Marshal The Force Provost Department was established in November, 1986. It is directly responsible to DIG Department of Finance and Administration. A Commissioner of Police, who is designated as the Force Provost Marshal, heads the section. The section is responsible for maintaining discipline in the Force. 3. Police Public Relations Office (PPRO) This department is charged with Public Relations duties for the Nigeria Police. By its nature , the office launders the image of the Force, monitors, manages and disseminates information concernig the Force; and forms a liaison between the Force and the public whom the Police have a duty to protect. 4. Budget and Finance The Budget Section is the financial arm of the Force. It has other sub-sections namely, Pensions, Mechanized Salary Section (MSS), Pay office and National Housing Fund. The Budget Section facilitates contact between the Force and the Ministry of Police Affairs, Budget office of the Federation, Federal Ministry of Finance and Central Bank of Nigeria in the implementation of monetary policies of Federal Government as it affects the Force. 5. NPF Insurance The Nigeria Police Welfare Insurance Scheme to provide Insurance cover for officers and men of the Nigeria Police. The programme is designed to compensate members of the Force who might have suffered accident, injury and death in the course of their official duty. 6. Nigeria Police Medical Services The Section was established in 1975 with the primary function of rendering health care services to serving members of the Force, retirees of the Force, their immediate families, detainees in Police cells and civillians workinng in the establishment. The Police Medical Service also render health care services to the general public in cases of emergency such as road traffic accidents, robbery victims, flood, fire disasters etc. 7. Police Printing Press The Police printing Press was established in 1965 to produce books and stationary for official use in the Force throughout the Federation. 8. Police Band The Police Band performs its statutory duties by performing at ceremonial parades, state/public functions as well as private engagements, thereby furthering the good relationship between the Force and the public. 9. Airport Police Command 10. Sports Unit 11. Railway Police Command 12. Port Authority Police Command